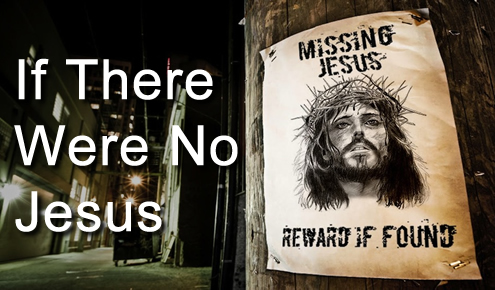 A world without Jesus…not a world I would want to be a part of.  But let’s take a look at it.  A world without the existence of Jesus—the savior and Lord of many people around the world.

Jesus is God, so a world without Jesus would be no world at all.  No creation.  The world would be very different from what we call home today.  A world void of form.  A world with no roaring oceans, no majestic snow-capped mountains, no green flowing plains.  No animals and no humans.  Just darkness and stagnate waters.
So we know that a world without Jesus would be a world that would not be created. Human-beings would not be created.  We could never have the option to believe in Him or not, because we never came into existence.  But for sake of argument, let’s say that the Earth, as we know it, came into being without a creator, like some people think.  The universe rolled the cosmic dice and earth appeared.  Water formed and gathered, the grass began to grow, animals sparked to life and Human’s evolved from apes.  A world without Jesus would look like this.  No creator, just a chance happening.

The earth just happens to be in a perfect orbit to have equal seasons and a climate that’s just right and for us to live. An orbit a few degrees closer to the sun would make Earth to hot to sustain life…ask Venus.  An orbit a few degrees further from the sun would make Earth too cold to sustain life…ask Mars.   We are even lucky enough to have both day and night, as opposed to most planets in this galaxy, which have one side locked in perpetual darkness and the other side locked in blazing daylight.  And because there is no Jesus, all this comes to being because of the roll of the “cosmic dice.”

But saying all that as fact, if there were no Jesus, what would Christmas look like. It would just be another commercially driven holiday…kind of like Valentine’s Day.  Created for you to buy gifts for everybody you care about.  Santa Claus and his eves would rule over the Christmas season unchallenged.  People would be believing in the Christmas spirit without believing in the Spirit of Life.  People would celebrate Christmas magic and not the true meaning for the Season.   There’d be lots of spending but no celebrated birth of the Savior.  No church Christmas plays about the Nativity.   No wise man, no kings, no shepherds coming to worship, no angels singing.  No church for that matter.  There would be no place to worship the Messiah.  The bride of Christ doesn’t exist.

What if Jesus was born because of chance and he was just a man, like me born into sin and got crucified just as the real story goes? No man could be saved, because he is not a worth sacrifice for sin.

What if he was just a man and Jesus didn’t die for our sins? He made nice with everybody and He was never placed on the cross.   Still no forgiveness for our sins.

And within that is the real tragedy, if there were no savior…no Lamb of God, then the whole world would be doomed to the Hell and eventually to the lake of fire, to be tormented forever. Jesus the Deity was not around to take the punishment we deserved for sin on to Himself, so we had to pay for it ourselves…through our death.

The bible says, “God so loved the world that He gave his only son…”   If there were no Jesus to give, God would have no way to show He loved the world.   No one to give to take our deserved punishment.  God, being a Holy and Righteous being would have no options but to punish us and complete separate Himself from us.  Thus, we would all be doomed to eternal torment.

And Jesus is God and God is Jesus… so no Jesus would ultimately mean, a life after death would just be darkness, nothingness, we would cease to exist. No need in worrying about torment after all.

That would be good for the atheists. Live however you want, you won’t be held accountable.

Writing this blog was tough for me. Tougher than most, because trying to create a world where there is no Jesus has me looping around in multiple paradoxes.  Because there is no world if there was no Jesus.   This blog could for all intents and purposes be the shortest blog in history.

A world without Jesus would be– nothing, no world. The end.

To write this blog I had to sound absurd and to deny some truth to even make a world without Jesus possible. But it’s not possible.  It’s just more proof that Jesus is real and is God…there is no taking Him out of the picture.  If you do the whole picture falls apart.  In fact, there is no picture without Him.

I don’t know what my life would be like without Jesus. Probably not the same person I am today, and definitely not be writing this blog.

A world without Jesus, I shudder at the thought.

Alright now I want to hear from you. Write in the comments below on what you think a world without Jesus would look like.  I would love to hear what you think.

And maybe you are one of those people that believed that the world is without Jesus and now you are thinking that Jesus could be God and that the world needs him. A world without Jesus just doesn’t fit.  If you are one of those people, I’d love to pray for you and lead you to know Jesus. He is here, and He loves you.  Email me and we will pray and give you tools necessary to live for Him.  All you have to say is yes.

If you are new to my blogs, you are not here by accident. God wants you here. Read some of my earlier blogs and join the family.

Well that’s it for now. Be blessed and remember you are the salt and light of the world.

43 Replies to “A World Without Jesus”