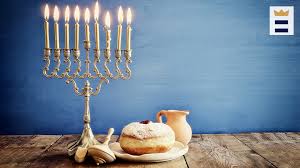 Welcome back to the blog. This is Salt and Light Commission and tis the season. We are in full swing, gearing up to celebrate the birth of our Savior, Jesus Christ! But we would be mistaken if we didn’t take mention to our older brothers in their observance of Hanukkah, another holiday that is celebrated around this time, primarily by people of the Jewish faith. The Jewish faith is much like Christianity, in fact, Christianity started from Jewish beliefs, as in believing in the one true God. Christian theology is based on the same beliefs in the Torah. The Torah is in fact included as the Old Testament in our bibles today. We do have major differences about the Promised Messiah. We as Christians believe the messiah is Jesus, and He has come and will come again. The Jews rejected Jesus as the Messiah, and are now waiting for the true messiah to come for the first time. That is a major difference! So with a difference like that in our faiths can and/or should Christians celebrate Hanukkah? Let’s dive right in.

If you are like me, when you think of Hanukkah, you may think of a 9 candle-holding menorah, known more specifically as a hanukkiah. You might also think Hanukkah is 8 nights of the CHRISTMAS! Yes, because it’s the Jewish equivalate of Christmas, right? Wrong! I was totally wrong in my thinking years ago.

Hanukkah is not a Jewish Christmas. Hanukkah means dedication in the Hebrew language. It’s traditionally known as the Festival of Lights celebrated in the fall and winter months. The Jews use a Lunar calendar instead of a Gregorian calendar calendar, so the dates of the festival jumps around from year to year.

So if Hanukkah is not a replacement for Christmas, can Christians celebrate it without fear of rejecting Christ as the Messiah? Before I answer that, let’s take a look at how Hanukkah came to be.

The Story of Hanukkah

The story of Hanukkah takes place in a time of Devine silence. There were no prophets giving messages from God to the people. No signs from God. No miracles. And the people had no way of knowing if God was even still with them. It was just silence for hundreds of years.

When Alexander the Great went on his quest to conquer much of the known world, he captured Jerusalem, but he allowed the Jews to keep their traditions and culture. The Jews loved Alexander for that. Things changed when Alexander died suddenly. His empire was broken up amongst his generals and throughout the lines of secession, Antiochus IV became king in 175 BCE. Antiochus was a harsh ruler. His goal was to assimilate the Jewish people into the Greek culture and completely erase there Jewish heritage. He banned reading the Torah, he banned Jewish rituals , and he placed idols of Zeus and other god’s in the temple. He also made a decree that the Jewish people must sacrifice a pig to Zeus and eat it’s meat. This was in complete defiance to the commands of God.

Many Jews, didn’t mind conforming to the Greek culture. Some even changed their names to Greek names to fit in. They are called Hellenistic Jews. However, Jews like Eliezar and Hannah and her 7 sons were martyred because they refused to abandon their beliefs.

Antiochus decrees made it to a city called, Modin, where Mattathias and his 5 son along with the citizens of the town, later known as the Macabees, led a revolt against Antiochus’ army in 167 BCE. They were named the Maccabees after Mattathias’ son Judah, aka, ‘The Maccabee,’ or ‘The Hammer. They were out-weaponed and out-numbered, but these untrained forces made up of mostly farmers, held back the oppression and regained their sovereignty in 164 BCE.

The Jews wanted to clean up the temple and rededicate it back to God. They wanted to light the menorah, but there was a problem. They only found enough of pure oil needed to light the menorah for 1 day. And it would take 8 days to make more according to God’s specifications. After the menorah is lit, it is supposed to be continuously lit to signify God’s eternal presence with the Jewish people.

“Command the children of Israel, that they bring unto thee pure oil olive beaten for the light, to cause the lamps to burn continually.” ~Leviticus 24:2 KJV

How Is Hanukkah Traditionally Celebrated

For hundreds of years the miracle has been remembered with the lighting of the hanukkiah. It has 8 candles representing the 8 nights, with one extra candle in the middle standing higher than all the rest, called the Shamash or servant candle…it is used to light all the other candles on the hanukkiah from left to right. Before the lighting, every night, 2 blessings are sung or read aloud. On the first night only however, an extra blessing is recited to make a total of 3 blessings. After which you place the hanukkiyah in the window facing the street, as a public display of the celebration. The candles are burned for at least 30 minutes each night.

Games are played with candy, coins, and dreidels. A dreidel is like a spinning top with four sides. Each side has a letter of an acronym: Nes, Gadol, Hayah, Sham. Which means, “A Great, Miracle, Happened, There.” This is reference to the Maccabees victory over the superpower of its day. Depending on what side the top landed on, the players would do something in accords to the rules. Sort of like Uno but with tops.

Fried foods are also in play, because of the oil miracle. So deep-fried doughnuts and latkes (potatoes and onions flattened and fried) are the most famous treats associated with the celebration.

So, given what we have uncovered about Hanukkah, can and should Christians celebrate it? I can see nothing that would suggest Christians celebrating Hanukkah and Christmas as highly prohibited. After all, like I mentioned before, The Jewish faith started our faith. And if you search the scriptures, you see Jesus Himself celebrated Hanukkah, as recorded in John 10.

“Now it was the Feast of Dedication in Jerusalem, and it was winter. And Jesus walked in the temple in Solomon’s porch.” ~John 10:22-23 KJV.

If Jesus didn’t have a problem celebrating it, neither should his followers. He are called to be like Christ.

How Should Christians Celebrate Hanukkah?

~As we celebrate the lighting of the hanukkiyah, we can appreciate the miracle that God allowed the oil to last in order to keep the flames burning, like He commanded. And as we place the candles in our windows, it points to Jesus, who is called the Light. Recorded in John Chapter 1. In addition, Jesus calls us to let our light shine before men, and be that city on a hill.

“Let your light so shine before men, that they may see your good works, and glorify your Father which is in heaven.” Matthew 5:16

~As we celebrate the miracle of the small Jewish army defeating the Greek superpower that stood for opposition. We can also appreciate how Jesus told us He is the truth and how He will provide for all our needs, and how He will fight our battles. How we should not give into the world’s agenda.

“My God shall supply all your need according to His riches in glory by Christ Jesus.” ~Philippians 4:19

“And be not conformed to this world: but be ye transformed by the renewing of your mind, that ye may prove what is that good, and acceptable, and perfect, will of God” ~Romans 12:2

“For it is clear that our Lord descended from Judah, and in regard to that tribe Moses said nothing about priests.” ~Hebrews 7:14

~As we celebrate the historic dedication of the temple, we are looking towards Jesus as our High Priest, calling us the Temple of God.

“The God who made the world and everything in it is the Lord of heaven and earth and does not live in temples made by human hands.” Acts 17:24

Know ye not that ye are the temple of God, and that the Spirit of God dwelleth in you? ~ 1 Corinthians 3:16

So should Christians celebrate Hanukkah? Absolute! Why? Because it celebrates the miraculous hand of God. And because it all points to Christ. A foreshadowing of Jesus Christ and what He represented. He is the embodiment of Hanukkah and all the other Jewish feast days.

So when you are all sitting in a circle playing the dreidel games, you can talk about the miracle that happened there…how God delivered his people from opposition with the odds stacked against them. But don’t forget to talk about the greatest miracle of all, that God in the form of a man, came down and delivered the whole world from the oppression of sin and death.

This year Hanukkah is November 28 thru December 6, and my family and I plan to celebrate it for the first time. Wish us luck. LOL. I’m not sure if I’ll say the blessings in Hebrew, but I’ll try. If you are a Christian I encourage you to also celebrate Hanukkah, if you so choose. It’s not a requirement. But know this…it not a Jewish Christmas and you are not rejecting Christ. It’s a celebration of God’s continuous presence in our lives. We may not agree on who the Messiah is, if he has come or if he is still to come, but we can all agree on God still being in the miracle business.

The Hanukkah story started off with the Jewish people not having any assurance that God was still with them…turns out He never left. Happy Christmas and Merry Hanukkah!